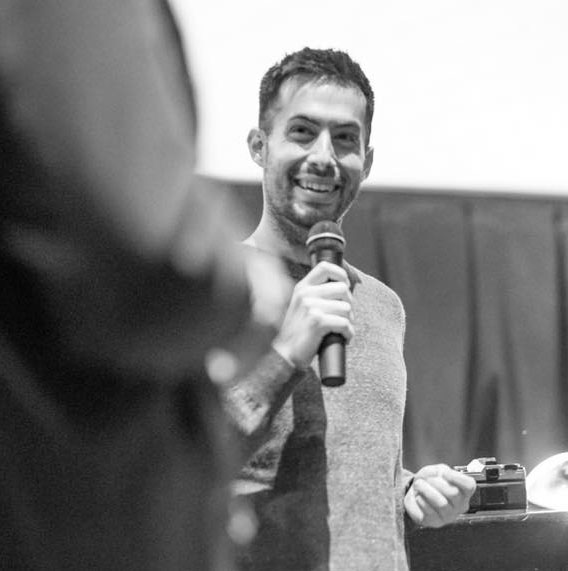 It is 2004. Your equipment is a mini DV camcorder and your mom's iMac. You're a teenager. What do you do? Take the summer before your junior year to ride trains across the country and shoot a movie. Obviously.

At least, that's what Max Gold '06 did. Those early filmmaking efforts have served him well as he's built a career in the industry, directing branded films for clients such as Mercedes Benz and Walt Disney Studios. Recently — in what we can only hope is the fulfillment of teenage Gold's dream — he celebrated the world premiere of his first feature film, "Silicon Beach," at the 2018 Santa Barbara Film Festival.

The roots of Gold's filmmaking career trace back before he took to the railroads. He and friends Mickey Bloom '06, Rickey Reyes '06 and Zach Gorman '06 were self-described filmmaking "nerds" during their high school years. The four would recreate their favorite flicks shot-for-shot in their spare time. A love of storytelling took hold, and Gold continued to shoot video freelance throughout college.

While debuting one's first feature film is certainly a culmination of years of hard work and vision, the pathway to making "Silicon Beach" was not necessarily straightforward. In 2017, Gold was in New York, bags packed, preparing to direct a fantasy feature film, "Beast," on location in Iceland. In a level of drama fitting for Hollywood, just as he was about to depart, Gold received the call no director wants to get: funding for the project had suddenly fallen through.

Gold describes that moment as "devastating." Crushed, the cast and crew made their way back to Los Angeles. Gold immediately began writing a different script and charging production costs to his credit card. "We were all ready to make a movie," he explains, and making "Silicon Beach" was a way to process the anger and disappointment of losing "Beast."

While the film they left behind in Iceland was a high-budget epic dark fantasy, "Silicon Beach" is a micro-budget, character-driven dark comedy. The story follows a 30-something actor who is written out of a hit TV show. At a professional and existential crossroads, he interviews at an LA-based tech startup, and pleads his case to a skeptical C.O.O. who is convinced he is discouraged by the entertainment industry and just wants to give the 9-to-5 a try. His sales pitch works, however, and he's offered the job. While "9-to-5" evokes burlap-lined cubicles and stale coffee, his "desk" is a giant stuffed teddy bear where he sits, precariously balancing his computer.

You can feel the stubborn rejection of artistic ambition in favor of a playground-like startup environment. The app the company develops, or the work the character was hired to do, is barely mentioned; rather his "work" is navigating inappropriate workplace relationships or piling into a car for a mandatory corporate retreat in the desert. The film relentlessly asks "What's the point of it all?" It's a question that comes into sharper focus after knowing it follows a big professional disappointment for everyone involved in this film's production.

"Silicon Beach" is not only written and directed by a Blake alum, the film also features cameos from Bloom and Reyes.

Bloom plays a smarmy and overly supportive agent who breaks the news of the protagonist's job loss. Reyes plays a character of his own making: a former classmate of the protagonist. Gold says the last scene was re-written around Reyes' character the last day of the shoot.

Sister Zoey Gold '11 also has a credit on the film. She works in the tech industry and was the first financial investor for the post-production phase of the project. Her producer title formalizes what Max describes as a longstanding reliance on her feedback and encouragement about his creative endeavors.

In another exciting plot development, we fade to black, the intertitle reads "one year later," and we open on Gold triumphantly reassembling his team to finally shoot their "Beauty and the Beast" film. This one is not the old "Beast" with its high budget and bigger name actors, but rather a brand new script called "The Pasture," which Gold will be able to produce at 1/10th the price point thanks to the lessons learned from "Silicon Beach."

With "The Pasture," Gold will delve into the inherently violent and cerebral aspects of the enduring classic fairytale "Beauty and the Beast." It is "a love story told as a horror film." The story seems like a far cry from the wry, plight-of-the-Millennial tone of "Silicon Beach." But considering how each film has informed the other, a storyline stitches the projects together.

Gold's sci-fi pilot, "Surfer's Paradise" (2019), shot in the Czech Republic is currently running the international festival circuit. Building on "Silicon Beach," Gold continues to expand his narrative range while honing his process of re-envisioning artistically ambitious projects on a leaner and smaller scale. Once "The Pasture" finishes shooting this summer, Gold's next project will be to take things back to Minnesota to direct a script written by Bloom; a darker take on "The Little Mermaid," shot in the lakes around Minneapolis.

"Silicon Beach" was released on Amazon Prime in April 2019 and will come out on Hulu, Google Play and iTunes later this year.