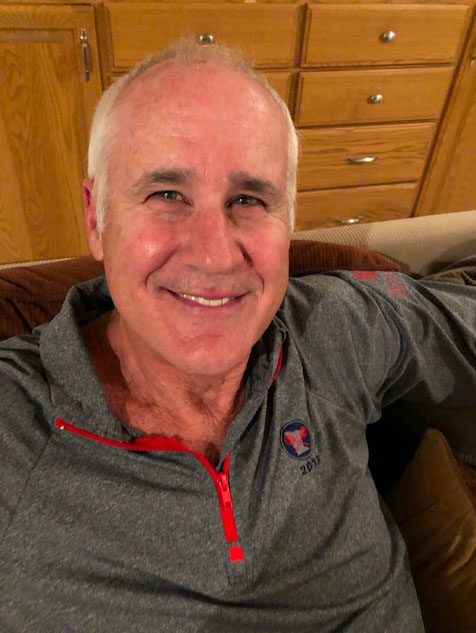 Happily retired since 2009, Phil Ahern '69 lives with his partner Heidi in Eden Prairie with frequent visits to Tucson, Estes Park and Delray Beach.

Q: It's been said that everyone gets 15 minutes of fame. What happened during your 15 minutes?
A: I like to tell people I was once the all-time leading men's basketball scorer in my school's history. If pressed for details, I'm obligated to admit that as a member of the first class of men at Connecticut College, I scored the first point in our initial game against the Coast Guard Academy. I banked in the second free throw after airballing the first, so at that moment I was the all-time leading scorer! My roommate and I also have some enduring fame in being the guys who came up with the school moniker, the Camels. Even though we intended it to be a joke, 50 years later Conn College athletes are still called the Camels.

Q: If you had your own talk show, who would your first three guests be?
A: Ulysses Grant, Andrew Jackson and Teddy Roosevelt. As long as I kept my mouth shut, I think we would have a fascinating conversation.

Q: What book has influenced you greatly? How?
A: I recognize it's a rather cliched response, but unquestionably "To Kill a Mockingbird." I think I am like many men who admired Atticus Finch's compassion, honor and wisdom and tried (generally unsuccessfully) to pattern ourselves after him. I have to admit, it was somewhat of a relief when the sequel came out decades later and revealed Atticus to be as flawed as we are.

Q: What is the first thing you think of when you wake up in the morning?
A: Three things: gratitude to God for the gift of a good night's sleep, the dogs need food and Philip needs coffee.

Q: I was once mistaken for...
A: I never understood this, but back in the days when I had more hair, I was frequently mistaken for Steve Martin. It got to be so common that I often decided to play along and tell them that I indeed was him. Led to some interesting conversations — I even signed a few autographs!

Q: When was the last time you were nervous?
A: This isn't the last time I was nervous, but the last time I remembered being nervous. When I walked into the Bovey Chapel last month for a Blake 50th reunion planning meeting, I felt a chill go down my spine. I didn't know what it was at first, but then I realized I was flashing back to the absolute terror I used to feel before giving a speech in front of the entire Upper School. I don't think I slept much more than a couple hours in the nights leading up to my speech.

Q: What teacher inspired you the most? How?
A: Without question, Don McCaull. I had him for freshman English, and every moment was pure joy. He loved the spoken and written word and transferred his passion to every one of his receptive students. He loved the TV show "Batman" and encouraged us to watch it by including a "Bat Bonus" question on most tests. Tragically, he died after open heart surgery at only 32 the summer before I was scheduled to enjoy another year of English with him.

Q. What's your favorite family tradition?
A: My family is Irish, loud and quite enthusiastic (if not talented) musically and enjoys jamming and singing together. Somehow along the way, we adopted Journey's "Don't Stop Believing" as our family anthem, and we generally close family gatherings with a rousing rendition. My son Sam '95, nephew Jack and grandson Alex (and some others too) all play the song well on piano, so there's usually a battle for control of the bench.

Q: What's the most fun you've had this week?
A: Being on the squash courts with the kids in my nonprofit Beyond Walls. Rob Hensel '73, David Schall '72 and I founded an organization eight years ago designed to get kids to graduate high school and college by offering a program centered on education and squash. Every student who has graduated from our program has gone on to college, usually the first in their family to do so. They love learning a sport they had never heard of before, and I always get a kick out of getting on the court with them.

Q: What do you miss most about being a kid?
A: So many things. The unadulterated joy kids seem to find in almost everything. The complete lack of self-consciousness kids exhibit. How wonderful and endless summers seemed back then.