End-of-year 2017-18 student award recipients and information can be found by following these links for the Middle School and Upper School.


Maya Chadda '19 was recognized for her leadership and gregarious team player spirit at YMCA's Camp Warren. "I believe I can be the change because progress is simply small choices made by enthusiastic people," Chadda said. Read more here.

Samuel Gelb '18 and Timo Hemphill '20 were featured in a story in the U.S. Department of Education's HomeRoom blog. Both students offered their perspective on the importance of financial education and their work with the Asset Management Group, a club Sam founded at Blake. 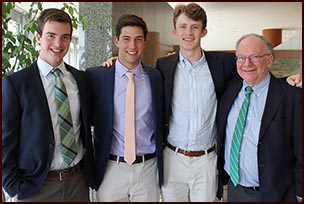 2018 graduates (l-r) Chris Gill, Sam Gelb, Nick Crosby and Kyra Willoughby (not pictured) were named finalists in this year's Federal Reserve Bank essay contest, which asked students to analyze whether the federal minimum wage should be raised to $15. The students wrote essays for an economics course taught by Upper School social studies teacher David Zalk '66 (at far right) and each received a $100 cash prize.


Sarah Weinshel '18, placed second in photography in the Rimon: Minnesota Jewish Arts Council Keren Or (Ray of Light) creative arts youth contest and was a presenter at the seventh annual P'Chotchka event.


Shreya Mohan '22 performed a two-hour dance recital at the Minnesota Masonic Heritage Center in Bloomington. The recital, also known as Arangetram, consists of dances spanning four Indian languages with short breaks for introductions to the pieces. Shreya has been studying the classical Indian dance form Bharatanatyam since she was 3 years old. 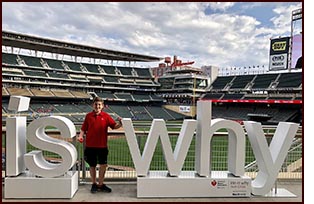 Abbott '24 raised more than $5,000 for the American Heart Association through his participation in the Twin Cities Heart Walk.


Kennedy Rupert '20 is a member of girlsBEST (girls Building Economic Success Together), a program of the Women's Foundation of Minnesota, which engages, explores, reviews and awards grants to girl-led programs around the state. In addition to being a member of girlsBest, Ruppert chaired one of its committee meetings. 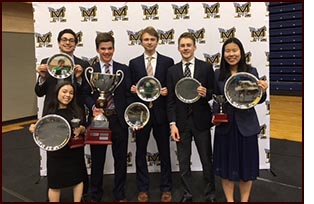 Six Blake students attended the National Debate Coaches Association championship in Atlanta, Georgia (l to r): Eva Motolinia '18, Nicolas Barra '18, Thomas Gill '19, Morgan Swigert '20, Jack Johnson '20 and Isabella Wu '19 . Nicolas and Morgan finished second at the tournament. Jack and Isabella also advanced to the semifinals but because they faced the Blake team of Nicolas and Morgan, a coaches' decision blocked them from advancing to the final round. Thomas and Eva finished in the quarterfinals where Eva placed individually as the tournament's third best speaker. 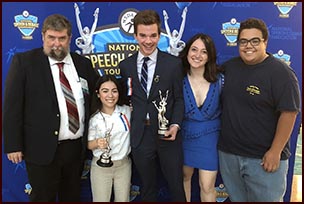 Results from Blake's spring athletic season can be found on the Blake Bears website.

Sofia Perri '23 took first place in the beam and vault Xcel Gold events and then earned the All Around State Championship title at the USA Gymnastics Xcel state competition. Her team placed second overall. Sofia competes with Legacy Gymnastics in Eden Prairie.

Truman Morsman '23 earned his second-degree black belt from American Karate Studio, where he has studied since 2011.

Max '26 qualified for Team USA in the World Karate and Kickboxing Union circuit. He is one of only four competitors in his age category and division to be selected from the United States. Max will travel to Athens, Greece to represent the United States.


Faculty and Staff Awards and Honors

Congratulations to faculty and staff who received Blake 2017-18 end-of-year awards. Recipient names and award descriptions can be found here.

To submit an item for the fall/winter edition of Applause, email communications@blakeschool.org.